There’s nothing better than a good crawfish boil. And there’s nothing more fun than making a party out of it. Memorial Weekend is crawfish time in Fredericksburg, Texas. 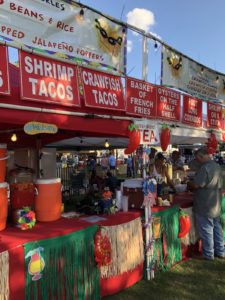 “Living in Fredericksburg is sort of like a non-stop festival.”

There’s always something to do.

We began at the beer tent where they had a lot of choice including Alstadt on draft. The beer counter is always the best place to get the news and shoot the breeze. The music was amazing and people were already dancing.

While Phil checked out the food, I got hung up at the beignet tent. There’s nothing better than a beignet at a crawfish boil. They are light, sweet, delectable and scrumptious. Phil got Crawfish Sausage from the Texas Cajun Sausage Co. that was delicious and Crawfish Tacos from the Longhorn Street Cafe booth. The Longhorn Street Cafe serves meals in the livestock auction building and some say it’s some of the best comfort food in Fredericksburg. I had the gigantic nachos from the booth next to the beignet truck. The nachos had brisket and sausage and all the fixings and was plenty for four or more. We sat at a large communal table where people were coming and going.

The Old West Soda Co. had free refills in the coolest copper cups, but I got snagged at the Tea-2-Go booth. They had the most amazing tea. I picked the Watermelon Black Tea that was delicious. 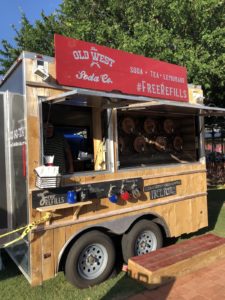 Besides food, drink, and music, there were plenty of booths where artisans were selling their crafts and we made a tour of them. We also ran into plenty of people from town and we met visitors who were just ready for a good time.

The great thing about the big festival weekend events is they last awhile. Locals and visitors alike get to mingle, enjoy, and make friends.